Snoop From The Wire Arrested 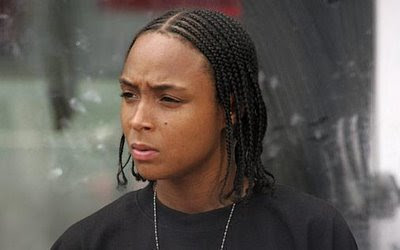 Police arrested popular actress Felicia “Snoop” Pearson on minor drug charges on Wednesday (August 20), after she was detained for refusing to cooperate as a witness in a murder trial. Members of Baltimore’s Homicide Unit entered Snoop’s Northeast Baltimore home with a “body attachment” warrant, which allowed authorities to arrest and detain her. Once inside, they also found two cigars filled with what is allegedly marijuana as well as marijuana residue.
Police may hold Snoop until September 16, when the murder trial of her associate Steven James Lashley begins. Lashley is accused of stabbing three men - one fatally - outside a Baltimore New York Fried Chicken, in Snoop’s defense. Snoop already told investigators that she wasn’t involved in the stabbing.” According to The Baltimore Sun, a warrant was issued for Snoop on July 1, after she missed an April 21 trial date. She also recently avoided prosecutors’ phone calls in regards to the trial. Snoop was sentenced to eight years in prison in 1996 at the age of 14, for shooting and killing Okia “Kia” Toomer during a dispute between the two females.