Why LisaRaye Lost It 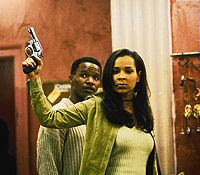 According to sources, LisaRaye had a perfectly good reason for spazzing out and attacking her husband Turks & Caicos premiere Micheal Missick- she was stone cold busted! While everyone was yappin’ about mike running around with Rocsi, he had hired a private investigator that caught LisaRaye canoodling with a much younger unidentified man. This is why even though LisaRaye decided to forgive her husband’s infidelities Premier Missick preceded with the divorce and had her banned from their house. Facing a life without first lady status LisaRaye went back to her hood roots and threw them bows!